Saint Gaudens is a lovely town in the foothills of the Pyrenees Mountains in the far south of France. From this region of France, in 1847, Bernard Saint-Gaudens, a shoemaker, immigrated first to Ireland, where he married Mary McGuinness and where Augustus Saint-Gaudens was born to them on March 1, 1848. The Saint-Gaudens family moved on to America when Augustus was six months old.

After apprenticeships and training in Paris and Italy, Augustus Saint-Gaudens developed a "heroic" style of sculpture which brought him fame and recognition as the pre-eminent American sculptor of his era. His statues of Lincoln, Farragut, Adams and many others are found throughout the US. His statue of Sherman in New York's Central Park and his Shaw Memorial (the Civil War officer portrayed in the Academy Award winning motion picture Glory) in Boston are considered the highlights of his work. He also worked on numerous numismatic commissions and projects (see below). Augustus Saint-Gaudens died at his famous artists' retreat in Cornish, New Hampshire on August 3, 1907.

A publisher's trademark is called a colophon. Our Saint Gaudens colophon is derived from the most famous work of our namesake, Augustus Saint Gaudens. Augustus Saint Gaudens was the pre-eminent American sculptor of the latter decades of the 19th century. In 1907, just before his death, he accepted a commission from President Teddy Roosevelt to design a new series of coins for the US Mint. Saint Gaudens designed several proofs for various coins. His design for the penny lost out to the new design we now know as the Lincoln Cent, but his designs for gold coins were recognized for their beauty and accepted by Roosevelt and US Treasury officials. His design for the $20 gold piece became known as the Saint Gaudens Double Eagle.

That "Walking Liberty" design is still used today by the US Mint for the Gold Eagle US bullion coin. Among the sample versions designed by Saint-Gaudens for the coin which were not accepted were various designs which included Miss Liberty wearing an Indian headdress and having angel's wings.

In 1905, while touring the Smithsonian Institute, President Theodore Roosevelt marveled at the ancient Greek coinage on display and asked himself why American coinage seemed so "bland." Compared to Greek coinage, Roosevelt felt that our nation's coins were "artistically of atrocious hideousness." The beauty of the classic Greek coins crystallized his decision to launch new designs for the whole range of U.S. coins.

Roosevelt felt that coins were more than round bits of metal--he felt that they reflected a country's greatness. By 1905, America had grown to become one of the most powerful nations on earth. Roosevelt wanted to see coin designs that would reflect America's pre-eminent status.

The president contacted the artist who had created his 1905 inauguration medallion, Augustus Saint-Gaudens. He asked the aging sculptor to produce a new series of coins. For a fee of $5,000, Saint-Gaudens agreed to produce a variety of coins similar to the ancient Greek coins which Roosevelt admired.

Unfortunately, Saint-Gaudens died of cancer before his task was completed, but his majestic Double Eagle $20 gold piece is considered to be the most beautiful coin of all time and, to this day, it is the most famous of all of Saint-Gaudens' works of art.

On the obverse of the coin, Liberty is portrayed striding toward the viewer into the dawn of a new day. In her right hand is a torch held aloft, and in her left hand is an olive branch. The Capitol building can be seen in the background to the lower left. At the top is the word LIBERTY and around the border are 46 stars representing the states of the Union in 1907. The setting for the obverse was taken from Saint-Gaudens' much acclaimed Victory, a sculpture that is part of the Sherman Monument in New York City's Central Park. The reverse of the coin depicts an American eagle in flight above the sun's rays, with the inscription UNITED STATES OF AMERICA TWENTY DOLLARS arching across the top.

When Theodore Roosevelt first viewed Saint-Gaudens' Double Eagle design, he knew that the artist had created a coin that would be admired for ages. What he did not know, however, was that a quarter-century later, his cousin, Franklin Delano Roosevelt, would confiscate all privately-owned gold and most of these beautiful works of art would be melted into lifeless bars. 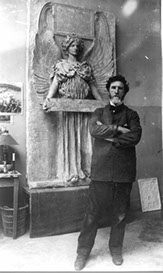