Duclerc Press is an Imprint of Saint Gaudens

An imprint is a division of a publisher that focuses on certain types of publications outside of the scope of the main publishing business.

A colophon is a trademark of a publisher, used as an identifier of their books. See the history below. 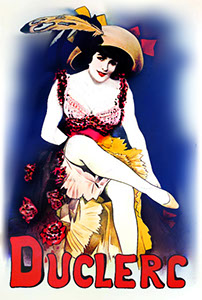 Mademoiselle Marguerite Duclerc was a famous, if not infamous, cabaret and theatre actress in Gay 90's Paris. Marguerite Duclerc was a denizen of the world of Toulouse-Lautrec and the bawdy cabaret scene of Montmarte and Moulin Rouge in the 1890's. Her beauty and sexuality were immortalized in a series of posters created by Alfred Choubrac in 1896. The posters were advertising for Marguerite's music hall cabaret. Duclerc Press uses a variant of one of Choubrac's posters of Marguerite Duclerc as our colophon, or printer's trademark. 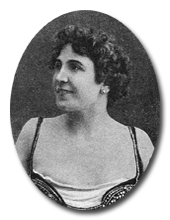 Marguerite's Cafe Duclerc was located at 16 bis, Rue Pierre Fontaine, in the 9th Arrondissement of Paris, Montmarte. It was two blocks South-East of the famous Moulin Rouge.

The Café des Incohérents opened in 1884 at this address. It became the Decadent concert house in 1893, under the artistic direction of Jules Jouy. Taken over in 1896 by singer Marguerite Duclerc it bore her name. When Marguerite retired from the stage it was sold by her and renamed the Grelot. Marguerite later died of a morphine overdose. After the First World War, it was a dance hall, named La Feria and Zellis. In 1932, it became the Cabaret of Nudists and from 1939 to 1955, the Paradise, still a naked cabaret. The old Duclerc music hall building was demolished in 1960 and is now a supermarket.